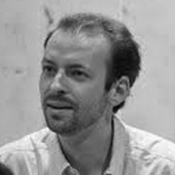 Chris Ruen is a 32 year-old author living in Brooklyn, NY whose essays and criticism have appeared in The New York Times, The New Republic, Slate, New Statesman, Seattle Weekly, The New York Press and Stereogum. He is a former Contributing Editor for the internationally-distributed Cool ‘Eh Magazine and has covered music for Tiny Mix Tapes. While studying in Minneapolis at the University of Minnesota, he founded The Wake, a student magazine that went on to earn national recognition in 2006 as “Best Campus Publication” by the Independent Press Association and is entering its 12th year in print.

His first book, Freeloading: How Our Insatiable Appetite For Free Content Is Starving Creativity, was published in 2012 by OR Books (US/Canada) and later by Scribe Publications (Australia/New Zealand), Scribe UK (United Kingdom) and a translation for Spain and Latin America will be published before the end of the year.

Along with the legendary artist Marc Ribot, Ruen organized and served as Master of Ceremonies for the Artists’ Pay For Radio Play Rally and Concert at Le oisson Rouge in NYC on Feb 25th, 2014. Performers, speakers and participants included David Byrne, Rosanne Cash, Jason Moran, Mike Mills, John McCrea and Tift Merritt among many others.

Ruen’s nonfiction work is partially animated by curiosity for what it means to be an engaged individual citizen-consumer in our time, as humanity begins to wrestle with this exponentially more technological, “connected” and fragile new century.

Ideals like “openness” and “free information” arose from the seminal days of the Internet, a government-funded project for scientific  collaboration. But how do these ideals really translate for the Internet before us today, a mainstream commercial space replete with access fees and advertising? Author Chris Ruen explores how old ideas about the Internet are blinding us from its true potential and what can be done about it.