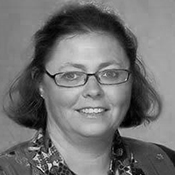 Catherine Hill, an attorney with more than 25 years of experience in creating and advising businesses, has been appointed the eighth F. William Harder Chair of Business at Skidmore College.

Prior to starting CooperHill, Hill was an attorney at Whiteman, Osterman & Hanna (WOH), and earlier in her career, at WilmerHale. Highlights of her legal career include starting the CleanTech practice group at WOH, which helped develop a significant portion of the wind energy resource in New York State, leading the series of transactions that helped to create Plug Power, the first fuel cell company in the United states to go public, and mentoring numerous small companies from start up to success. Hill was also general counsel and vice president of corporate strategy at Mechanical Technology, Inc., where she helped to create MIT MicroFuel Cells, a direct methanol fuel cell developer.
Hill earned a J.D. degree at Albany Law School and bachelor of science degrees in business and theater from the University at Albany. She has published several articles on sustainability and climate change and routinely speaks on the impact of regulation on renewable energy.

Established in 1984, the F. William Harder Chair of Business Administration is designed to make possible the appointment of a distinguished executive at the senior level, who will teach a variety of courses, participate in the development of the College’s program in business and in the interactions between the Management and Business Department and the liberal arts program, and energetically enhance Skidmore’s contacts with the leaders of both the Saratoga and the national business communities.

The talk will be about reconnecting with the humanity of immigration. I will tell my person story of being born into poverty in a class based society, loosing everything in a hurricane and then immigrating to America as an economic refugee. I will talk about melting into a middle class society and honestly forgetting the significance of my immigrant heritage. I will explain how a vacation to Ireland brought back the reality that my birth entitled me to and the role immigrating played in changing my personal narrative. I will then talk about the current immigration crisis. I will end with the footnote that I returned to Scotland for the first time in 2013 – to attend TED Global. I hope this is sufficient.