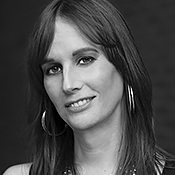 Jaye McBride has performed stand-up all over the country, sharing the stage with stars like Aziz Ansari & Jim Norton. In addition to stand-up, Jaye has written, produced and acted in a variety of short films. When not performing on-stage or on-screen Jaye hosts “Planet Funny Radio” on iHeart radio and writes “The Comedy Blog” for the Albany’s Times Union.

Having transitioned in 2007, Jaye is uniquely qualified to talk about awkward first dates, strained family relationships and self- acceptance. Make no mistake though, Jaye McBride is not a gimmick or one-trick pony. She is one genuinely funny lady!

“I can see a career for her for sure. She’s gifted.” – Aziz Ansari

Everyone has seen or heard stories of people who transition. Someone feels different most of their life, see doctors and therapists, struggle to come to terms with coming out to their family and friends and finally become who they want to be. But what about what happens next? Life after transition can be even more complicated. Discrimination, depression and self acceptance are realities after one transitions.